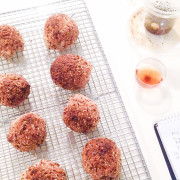 What’s the first thing you do when you have a cooking robot? Get it to knead you some bread, of course. A few weeks ago I went to a VIP event as one of the founding members of the Tefal Cuisine Companion Cuisine Club (Hello Bizzylizcook and Vegetaraian :o) . At the VIP event I got to play with this wonder machine and made a delicious vegan risotto and apple crumble effortlessly. It’s such a versatile machine. It chops, whips, mix, kneads, cooks, steams, blends, stirs, emulsifies, whisks, sears, crushes, mills and heats food. In the beginning I was afraid that it might be a bit complicated to use but it turns out to be quite easy and straightforward with an intuitive user interface and six automatic functions.

That first weekend I decided to test-drive my demonstration model, making one of my favourite breads, Maple Oat Bread. I use a combination of whole-wheat flour and oats which help lower the gluten content of the bread and increases its nutritional value. Though I’m trying to eat less bread, I’ve never been a fan of complete deprivation, so rather than stop eating it altogether I’d rather try making it healthier and better for me (and maybe eat a bit less of it). So when I discovered you can turn oats into flour and make bread with it, you could imagine my excitement. Why I love it:

This bread is quite easy to make so you can certainly make it by hand if you want. However, the Cuisine Companion makes it even easier as you don’t have to knead it. The machine does all the work, including maintaining an optimum proofing temperature. Once I had put all the ingredients in, the only thing I had to do was to wait and then shape the dough into bread rolls. Too easy.

What’s good about it:

In my book, oat is superfood. Here’s 5 reasons why you need to make oat bread, not that you need any.

5 Reasons Why You Need To Make Oat Bread

Disclosure: I received a complementary Cuisine Companion from Tefal both to play with and for editorial purposes.

You can find out more about the Tefal Cuisine Companion at https://www.cuisinecompanion.com.au/. It is now available at select Harvey Norman stores across Australia. 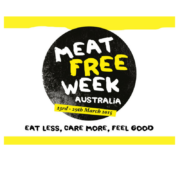 Did you know that Australia is ranked in the top three biggest meat-eating countries in the world (per capita), behind the USA and Luxembourg. Australians eat an average of 111.5 kg of meat per person per year, which is more than double the world’s average of 41.9 kg. This consumption compromises our health and with global meat production predicted to double by 2020, raises serious concerns about long-term sustainability and animal welfare.

Bowel cancer is now the second largest cancer killer in Australia. High consumption of red and processed meat has been linked to both bowel cancer1 and the increased risk of type 2 diabetes.

Globally, the growing demand for meat is leading to increased deforestation, water usage and climate change with the UN identifying the livestock industry as one of the most significant contributors to today’s most serious environmental problems.

It has also created the number one animal welfare issue in the world, factory farming. Australia’s annual Meat Free Week will return bigger and better from 23-29 March 2015. The week is dedicated to raising awareness of the amount of meat people eat and the impact it has on human health, the welfare of animals and the environment.

Meat Free Week challenges Australians to sign up to go without meat, including seafood, for seven days. By being sponsored, participants have the opportunity to raise funds for one of three leading charities – Bowel Cancer Australia (health), Voiceless the animal protection institute (animal welfare) and The World Land Trust (environment).

With a growing trend towards meat free or meat-reduced meals and the steady rise of flexitarianism over the past few years (a mainly a plant-based diet with the occasional inclusion of meat), Meat Free Week gives people the perfect opportunity to try out new foods, get more veggies in their meals and see whether a meat-reduced diet is for them, even if it’s just one day a week or one week a year.

And for the first time this year, Meat Free Week will also be expanding the campaign into the UK, gaining great traction with great supporters on board including Jamie Oliver, Paul, Mary and Stella McCartney.

This week I had the opportunity to interview Lainie Bracher and Melissa Hobbs, the founders of Meat Free Week – a global campaign to get you thinking about how much meat you eat and the impact that excessive meat consumption has on your health, animals and the environment, while raising money for several leading charities.

In this interview, Melissa and Lainie spoke about their journey and what inspired them to co-found this initiative, how they managed to convince Jamie Oliver to be the ambassador for the campaign as well as some the backlash they have received from vegans and farmers.

I know there are a lot of vegans who disapprove of campaigns that encourage people to eat ‘less’ meat such as Meatless Monday or Meat Free Week as they believe it distinguishes the consumption of other animal products (i.e. eggs or dairy) as being more ethically justifiably when they are all a result of tremendous violence, and it renders eating a small amount of meat any other day as ‘okay’ when it is not. The argument is that if we make an ethical decision to reject something that is morally wrong, then we must reject it all, every day, and not just on certain days.

I have mixed feelings about this ideal. On one hand, I want people to stop eating all animal products completely, but on the other hand I know that it is impossible for a lot of people to make such a drastic change without easing into it over time and I am glad for them to give it a crack without making them feel guilty as sin when they don’t stick to a plant-based diet from the very first day. I think Meat Free Week provides people with this opportunity in a fun and engaging way. It provides education. Education provides knowledge and awareness for people to make an informed choice. Love it or hate it, the campaign certainly has made a big impact with over 4,000 people signing up for the challenge, and raising over $150,000 for charity in its first two years.

So here’s the interview, do leave a comment or two and let me know what you think.

Voiceless – An independent, non-profit think tank focused on raising awareness of animals suffering in factory farming and the kangaroo industry in Australia.

Here some of the recipes we talked about in the interview and my favourite ones from the Meat Free Week Website:

Note: You can also check out my recipe page for some plant based recipes and inspiration Meat Free Week is on 23rd – 29th March 2015. You can check out the Meat Free Week website or their social media channels to learn how you can be part of this great event.

Here are the two really important things people can do to support Meat Free Week:

1. Sign up for Meat Free Week OR if not participating, donate. It’s easy and you’ll be showing everyone how it’s done!

You can register here to be sponsored as an individual or as a team and encourage others to join you. OR simply donate money directly to the charities here. After registering, downloading the App from App Store  or Google Play is a great way to get friends and family on the spot to sponsor you whilst you’re out and about. Monitor progress, share messages, get sponsors via Facebook and have friends and family make a donation right from the fundraisers smartphone.

2. If you’re already vegetarian, sign up and go vegan for the week. And if you’re a vegan (or already living meat free), sign up and sponsor a meat loving friend for the challenge.

So, are you up for challenge? Of course you are! Check out my 7 Tips For 7 Days Of Meat Free Eating if you need some help in getting started. I’ll also be running a giveaway very shortly to help motivate you to inject some greens into your diet so stay tune and subscribe if you don’t want to miss out on the announcement.

I share delicious vegan recipes & and lifestyle tips to help you eat more plants and live a more joyful, inspired, passionate life. Welcome to my blog ♥

No images available at the moment